As you know, I don't usually tackle big or hard to make projects in the kitchen.  Things happen .... stuff burns .... fire alarms go off.  It was karma when I found the recipe for roasted corn, green chili, cheese tamales.

In the OLD days, I cooked a lot of traditional Mexican food because half of our construction crew came from Mexico.  Lucky for me, they were more than happy to share recipes with a gringo.  It's not that this recipe is hard, it's just time consuming.  Happily, I found instructions for cooking them in my Instant Pot.

First up, mix up roasted corn, a can of green chilis, jack cheese (I chose pepper jack) and some cream cheese.  I'm thinking that last ingredient isn't authentic.

Probably the hardest part is soaking the corn husks for an hour and picking out the best pieces.  Then it's just a matter of spreading the masa on with a knife, placing filling in the middle and wrapping them up.  It's the wrap that's important. 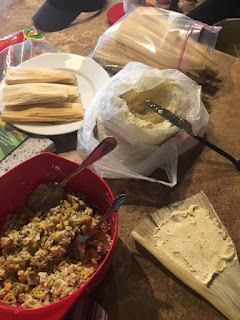 With a cup of water in the bottom of the pot and a rack insufficient for the job ... I really needed a basket of some sort ... I placed the tamales in the pot.  I have two instant pots now ... one for the rig (5 qt) and one to remain in the house (6 qt).  Disaster was in the making and I didn't have a clue!
I made sure the tamales didn't interfere with the pressure pin and set the timer for 90 minutes.  Think about that for a second.  Yup ... I was reading the regular recipe where you steam them for 90 minutes.
Time to fill the second pot.  With such nice corn husks, these were a LOT taller than the other batch.  No matter, I squished them in and turned it on.  Twenty minutes later I discovered the pin had not risen and the pot was NOT pressurized.  I tried it again.  And again.  Okay ... think Nancy.  What's wrong here.  Too tall .. I cut the tops off with a pair of scissors.  No water ... I added another cup.  Too full ... I removed five to a pot on the stove.
Finally I got the pressure to come up ... but now, how long do I cook them?  That's when it hit me.  90 minutes CAN'T be right.  I looked up another recipe.  20 minutes.  Oh good grief ... I tried to figure out how long they had been in the pot and how much more to cook them.  This is going to be tamale disaster!!!
When all was said and done, the first pot came out perfect in spite of the fact I have no idea how long they actually cooked.  The second pot could have gone little longer, but I'll just nuke them more when I reheat them.  The pot on the stove ... not done at all. 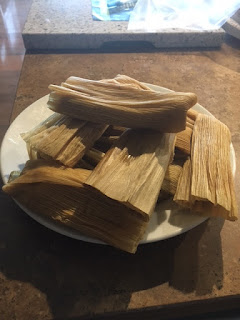 Lesson learned.  In spite of all the time wrangling and the fact that they aren't the prettiest in the world, I think they tasted DELICIOUS!!  So much so I ate THREE of them!!  I have three dozen to go, all of which are in the freezer. 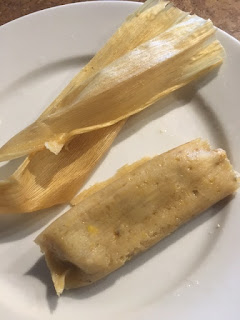 Since I now have an excellent source for masa, I may just make some pork tamales for Christmas!!  I'm in tamale heaven!!